The ice cube maker is named after the shape of the ice it makes is cube. Do you know how such ice is made?

The principle of ice making:

Then, the water is pumped to the diverter head through the flow control valve, and sprayed evenly on the surface of the ice maker.

The water that has not been evaporated and frozen will flow into the water storage tank through the porous tank, and the cycle will be repeated.

Until the ice cubes reach the thickness we need, the hot air discharged from the compressor is re-introduced back into the wall of the ice maker to replace the low-temperature liquid refrigerant.

In this way, a water film is formed between the ice and the wall of the evaporation tube, and the water film plays a lubricating role when the ice falls into the groove under the influence of gravity.

Water from the ice harvest cycle will also be returned to the water storage tank through the perforated tank, preventing wet ice from being discharged by the machine.

3.When the ice cube reaches the set thickness, it enters the de-icing state;

4.At the same time, the high-pressure hot air of the compressor will be diverted to the evaporator by the reversing valve, forming a water film lubrication between the evaporator and the ice cubes;

5.The lubricated ice cubes fall to the ice storage tank by gravity.

That’s it, pieces of transparent ice are made by the cube ice maker, and beautiful and delicious drinks are made in bars, milk tea shops, KTVs, etc. 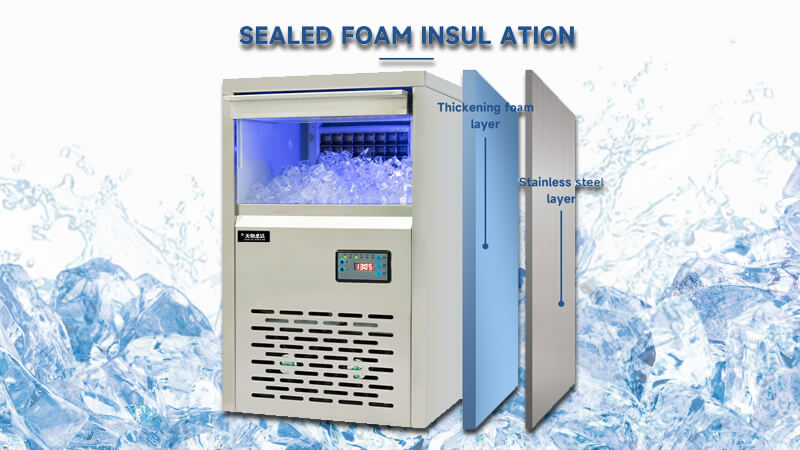